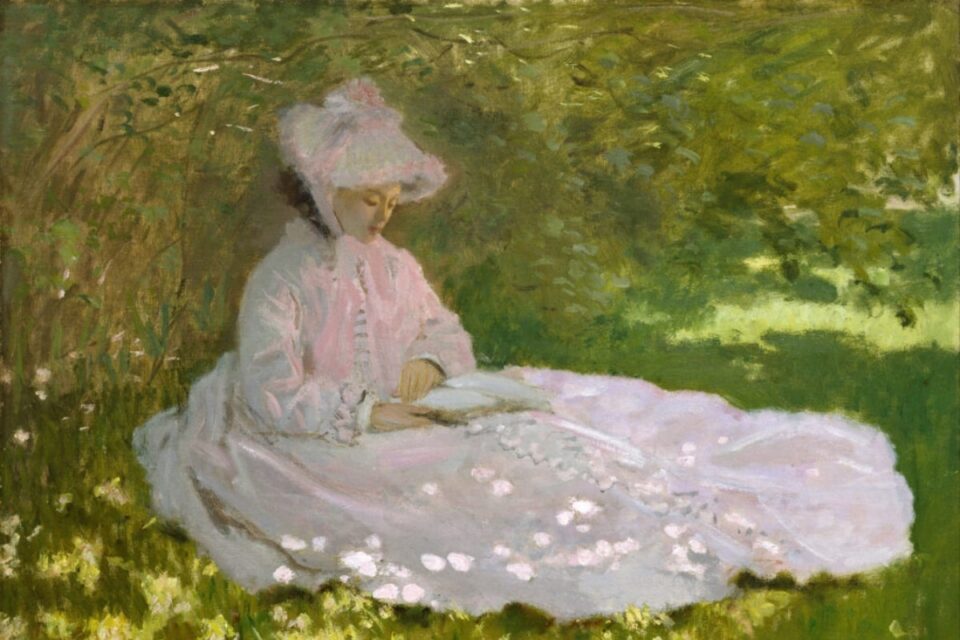 Claude Monet was a French painter whose artistic style and paintings set flames to an art movement known as Impressionism. The master was deeply invested in capturing light and natural forms influenced by many objects. As a result, several of his paintings are inspired by famous artists and protagonists.

But, the one who Monet admired and brought its beauty to life was his wife. Camille Leonie Doncieux was Claude Monet’s first wife, with whom Monet had two sons. Not only was Camille a subject for Monet’s paintings, but Pierre Auguste Renoir and Edouard Manet admired her.

In 1846, Camille was born to a family who belonged to an ordinary underprivileged background. She met Monet for the first time in 1865 when she was only eighteen. She was popularly called La Monette and was one of the most charming women.

She was a ravishingly good-looking Woman blessed with beautiful dark hair, and her charm captivated every heart. Inspired by her beauty, Monet crafted many paintings about her and often described her eyes as being aesthetically pleasing.

Soon after they met, she started to model for him and became his favorite one. The professional bond progressed with time which eventually became profound on the personal forefront. Both of them developed feelings for one another and became lovers. Déjeuner Sur l’Herbe was the first painting by Monet that featured Camille as his model.

In 1866, Monet artist worked on a masterpiece entitled Camille or Woman in a Green Dress. This artwork gained Claude Monet good critical acclaim. Rumors suggest that this artwork was completed by Monet four days before the Salon deadlines.

While the painting is not a strict portrait of Camille, instead about the elusive green dress, the work elaborates on the aura of the promenade dress, probably borrowed for the occasion. Claude Monet’s paintings are always about vivid colors and fun elements. Unfortunately, this one demonstrates the dominance of green in the painting and even detracts the woman herself.

The artwork corresponds similarly to fashion shoots, where it’s about presenting the dress as beautifully as possible. Monet entirely highlighted the gaze of the women and an ever grand portraiture of the dress, keeping the background minimal and dim.

Camille is just raising her right hand towards her face like a fleeting gesture, surreal and flowing as if poetry. The Salom accepted the painting and hung it in their exhibition in 1866. The artwork was full of limelight immediately after the exhibition. Both the art critics and press applauded Monet for it, as well as the Paris newspaper tagged Camille as the Parisian Queen for her charming persona.

Camille With A Little Dog

Camille with a little dog is a hauntingly pleasing and intimate portrait of hers by Claude Monet. It is artwork from Monet’s private collection in which Camille can be seen sitting in quite a formal pose. Just like Woman in a Green Dress, the background of the painting is kept minimalistic and not very bright.

But, the foreground captures the allure and grandeur of the beautiful woman, Camille. It’s all about her, and the credit must be to Monet who brought it to life. The ability of Monet artists to paint the figure of a dog with just thick brush strokes is lovely. But, on the contrary, the face of Camille is a brush worker with utmost precision and delicacy.

The love of the painting and the love for Camille by Monet is reflected in this creation. He did not wish to paint Camille hastily with mere swishes of brushes. That’s why there is patience, elegance, and the labor of love handcrafting this epic piece of artwork.

In 1867, Monet and Camille were blessed with their first child, Jean. Soon after he was born, Monet started working on his next big hit, The Luncheon, in the winters of 1868. It is a highly massive work of oil-on-canvas which measures 230 cm by 150 cm.

The narration of the portraiture is simplistic but with a classic Monet touch. It showcases Camille and her blonde-haired son sitting at a dining table. She admires her son sitting at the dining table eating food while only having his eyes on the food. An empty seat is left for her husband to join them.

The artistic wit of Monet elaborates on a lot of objects overlapping each other on the dining table. All of it seems realistic and blends perfectly well with each other. The loaf of bread, the newspapers, and the tablecloth depict its improper creases that everything is just in motion.

There is sunlight striking through the large window to the left of the painting. It bathes the well-stocked light onto the table and casts an impression of any usual lunch scene in a regular household. Monet subjected this piece of artwork to the Salon in 1870 but was rejected for exhibition. Finally, however, he included this work in the Impressionist Exhibition in 1874.

An artistic caliber like Claude Monet is a rare talent known for in-depth expertise in color and technique. Camille’s wife was a ravishing beauty that contributed to his artworks by being the perfect definition of beauty and elegance in his frames. Check Claude Monet’s famous paintings and artworks to know more about him as a prolific artist. You can also learn more about Money artists through these creative artworks and painting styles.

Mid Block Heel Sandals – Why They are a Wardrobe Staple

Self-Care Practices to Improve Your Wellbeing

Ways to Add Some Comfort to Your Space